Welcome to the official website of Steve Murphy. If you like edge-of-your seat action, exotic locations, real life spy, adventure, thriller, and combat stories, steamy sex, and protagonists who are “the stuff great characters are made of”…you’ve come to the right place!

Steve Murphy is not your typical writer. He might be your most atypical writer right up there with Hemmingway and Louis L’Amour, because like them, he struck out on high adventure, at the age of 17, traveling throughout South America to Mexico City, Panama, Bogota, Columbia, to Peru, across the Andes to Cusco, Machu Picchu, Lake Titicaca, Copacabana, to La Paz, Bolivia and to Santiago, Buenos Aires, Iguazu Falls, Brasilia, Sao Paulo, and then he enlisted in the US Army, and volunteered for the Infantry, and Vietnam, where he served with the 1st Infantry Division, and later with a MAT, Mobile Advisory Team.

After discharge from the Army in Vietnam, Steve spent the next five years working covertly as a “contractor” to the Central Intelligence Agency's Phoenix Program’s Counterinsurgency and Counterterrorism project, on a never before revealed project known by the innocuous cover name, “Operation Beaucoup Dinky Dau” that worked directly with South Vietnam’s Minister of Economic Development, the US Military brass, and coordinated the largest Black-Market Operation ever sanctioned by the CIA.

“Operation Beaucoup Dinky Dau”, although fictionalized provides a complete account of a secret operation that was never supposed to be revealed, unfolding new insights into America’s Vietnam war.

This story draws on the experiences and accounts of those men, led by a former SSG/MAT Team Advisor, John D. Walker, known in Saigon as Johnnie Walker or the “The Fixer”, and those who directed the covert operation from the senior corridors of Washington DC and the CIA. Steve gained highly unusual access to the records and the individuals who ran this top secret covert organization, “Operation Beaucoup Dinky Dau”, which supplied the U.S.-led indigenous teams (Montagnards, Chinese Nungs, and Meo tribesmen) fighting the North Vietnamese Army.

The Operation directed flights of the CIA’s Air America program that flew civilians, diplomats, spies, refugees, commandos, sabotage teams, doctors, war casualties, DEA officers, and visiting VIPs. They coordinated many of the “Food Drops” (known as “Rice Drops”) and the “Hard Drops” (Ammo and weapons drops) to the Meo and Hmong tribesmen fighting against Communist Pathet Lao, as well as to the Phoenix Program’s operations to destroy the Infrastructure, and the political organization of the Viet Cong and the NVA. They also directed the airlift of a humanitarian mission to build US hospitals and provide development aid of $450 million to prop up as a façade to covert operations.

Besides his writing Steve’s extraordinary dedication and a passion for the underdog, so he himself in producing, directing, and writing over 900 Network TV Shows and Documentaries, traveling all around America…. Stories all based on real life David v Goliath legal stories, broadcast as the Insider Exclusive Investigative Network TV Series “Justice in America” as seen here @ http://insiderexclusive.com

Some of Steve’s other bestsellers are: 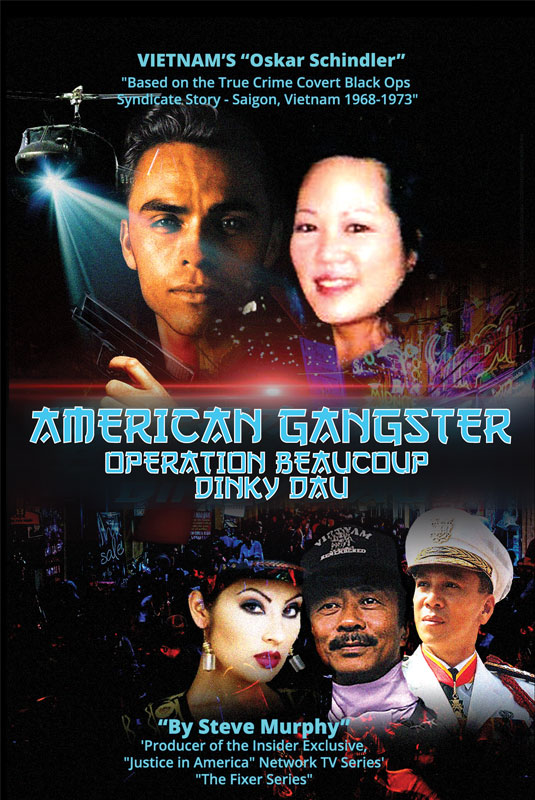